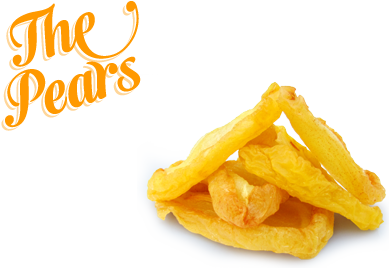 That dried pears are produced from the Bartlett variety, well known for their sweet taste and tender texture? ... Read more

Natural Grocer offers pears in a number of pack sizes in the following varieties:

Wild pears grew in abundance in the woods and forests of Central and Southwest Asia since prehistoric times, but like many wild species were barely edible. Today, the European pear is the major species cultivated for commercial use.

By Roman times, there was a reported 38 varieties of pears. Pear cultivation spread with settlement and trade throughout Europe, spreading eventually to the Americas and Africa.

Of the more than 3000 species in existence, there are 3 major cultivars which account for the majority of commercial production – Bartlett (or William), d’Anjou and Bosc.

As with most dried fruit, the flavour is much stronger and intense, with a chewy texture making this an absolute snack time favourite.

Did you know that dried pears are produced from the Bartlett variety, well known for their sweet taste and tender texture?

Enjoy our dried Pears in cooking and baking, chopped and sprinkled over your favourite breakfast cereal or simply one or two halves as a snack.

The Natural Grocer offers dried Pears in a number of pack sizes.